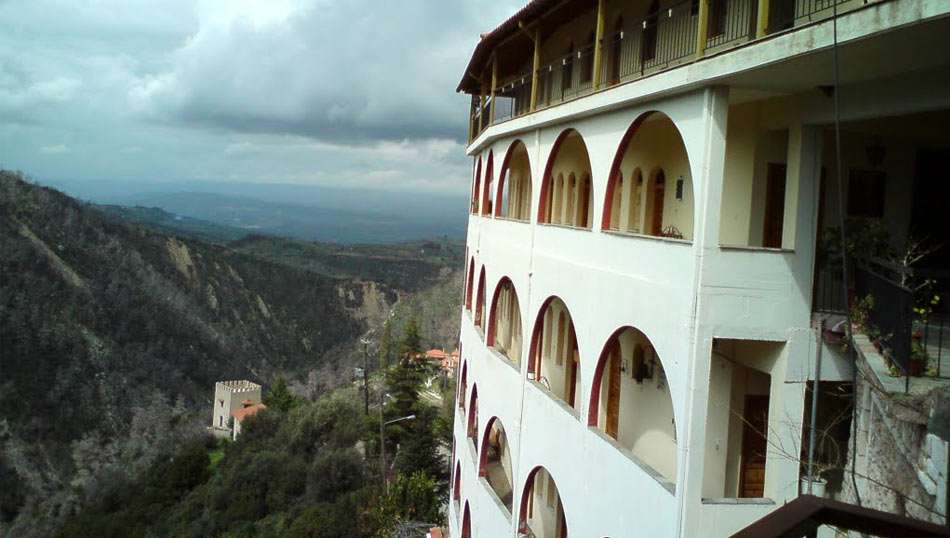 The landscape and the view are fascinating from this old Monastery, which hangs literally over the narrow gorge of Triton, while the homonymous thunderous waterfall streams on and whitens with its waters the dense forest of wild oaks lying opposite the monastery.

The Monastery dates back to the 12th century. During the Turkish domination, it was sorely tried by the Ottomans, while, during the Greek War of Independence of 1821, it was used for secret deliberations by the chieftains. In 1915, a candle caused a fire that nearly destructed the Monastery. Fortunately, the valuable icon of the Madonna was salvaged.

The story about the naming of the Monastery survives even nowadays by word of mouth. It runs that two women, with their babies clasped in their arms, were standing on the rock where the stone Monastery is situated today. The first woman was a faithful Orthodox, while the second one was unfaithful. In those days, rumor had it that Virgin Mary used to appear in those parts and do wonders. The pious woman exhorted the other one to believe in the miracles of Our Lady and, in order to convince her, she threw her baby down from the huge rock. Virgin Mary was present and saved the child. So the unfaithful woman took her baby too and threw him down the precipice crying “Se peto” (which means “I’m throwing you down” in Greek). But her child struck against the rocks and was killed, because Virgin Mary did not bless his mother. That’s how the Monastery was named. There is, of course, plenty of historically based etymological information, which offer different explanations for the name of the Monastery.

It celebrates on the 23rd of August.